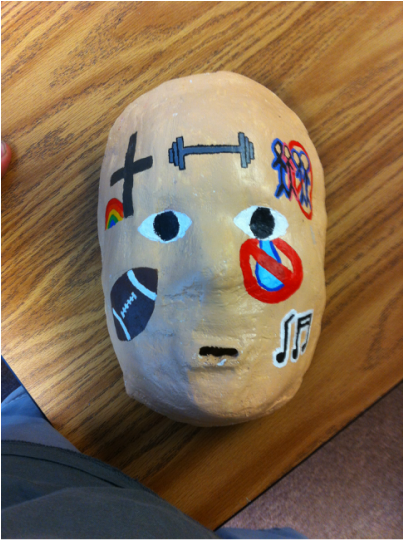 Ever since that first football practice in 4th grade, when it was a dark and gloomy afternoon and my coach told me in a deep, raspy voice, “Real football players don’t cry. You are a football player aren’t you”? I was instantly socialized to believe that even when you are in pain or you are sick, “men don’t cry”. When I heard him say that it made me feel more manly, so I stopped crying and ground out the rest of practice. This was a direct example of socialization, the way in which a person is shaped by society. In that situation I was neither a target, (the minority group), or an agent, ( the majority group). Although I feel now as though that could have had a negative impact on my outlook on sports, I don’t believe that incident had a positive impact on me either. I consider this to be important because modern society’s stereotype of teenage men playing sports is twisted.Even since I was old enough to think and decide things for myself, I was socialized to believe that all teenage boys in Durango, CO had to be tough, play sports, work hard, and always show nothing but masculine emotion. We had to always be straight-faced and never cry or be openly sad. As a boy, I was swayed to believe these things because even when I didn't know it, I had an underlying feeling that if I didn’t play sports, I would be rejected by my friends and maybe even my family. These were all strong examples of how I was negatively socialized as a young boy in modern society.


When I was young I was told that I had to play a physical sport and I was instantly swayed towards football from my Dad’s long time love for the sport. As soon as I was eligible to play I was practically chomping at the bit to get out on the field. As journalist Jules Law said, “Gender stereotypes come in many forms.  I was disappointed to note that in very youngest of children, from ages 5 and up 95 percent of kids in a poll taken in New Orleans in August of 2012, were expected by their parents to play a physically straining sport.  80% of these kids were male.”(Law, 2012) Often times parents encourage their kids to play sports because they want their child to get some consistent exercise. To a certain degree I think that parents do this because they are afraid that if their kids don’t play they will be teased for being unathletic. America is the most obese country in the world and parents are genuinely afraid that their kids will become overweight or obese. They might force it upon their kids for that reason as well.

From when I was just a young kid my parents always told me that a young man should get a job as soon as he can, work hard and save his money. In the article “Young Jobs in America” writer Martin Brown says, “ Since 2005 young men getting jobs is becoming less and less important to America's youth.” Since 2005 the rate of jobs for ages 15-21 has gone down 43% in a Gallup poll taken in 2012. This shows that the strain for young men to get jobs is going down drastically. However the pressure to work is still very visible in America’s youth.(Brown, 2012.) A  seemingly clear reason for parents strongly encouraging their young kids to get jobs is the parents are trying to keep their kids occupied. They then they have to spend less time always watching them and keeping track of what they are doing. The idea of making your kids grow up more quickly than they have to is very present. If a parent wants their child to grow up early, take responsibility and develop a good work ethic at a young age, then he/she can almost naturally set himself up for success.


I remember from almost day one it was relatively clear that being gay was not an option our family. It was almost a given that my parents would be extremely disappointed in me and almost wonder what they did wrong to make me that way.  In the article “Catholics disown their openly gay son”, the unknown author writes, “Catholic parents disown their openly gay son legally, the disowning parents told the press and I, no son of mine would ever like men.” Many would say that the measures that these parents took were much too extreme. Other parents would probably say that they are upset or disappointed with their children, but not disown their gay children, rather work to a point where they can accept them for who they are. If the disownment was obviously related to the religion of the family, than some people would blame that religion for the disownment and cause a lot of controversy between religions.


On top of young men having jobs, I have always been raised to believe relatively and think that a man should to be the workhorse of any family. A man’s hard work should be able to make enough to support a family so the wife generally doesn’t need to work. She could be the caretaker of things at home. Journalist Martha Epstein wrote in the article “Working Dad Lazy Mom”, “Working Dads have become the norm in modern society”. I don’t believe that can ever truly change, however most women in America are becoming more and more dependent on a man for everything they need. In cases where the working husband gets hurt on the job, some of America's women are left not being able to totally support a family in the husbands work leave or in worst case, permanent leave. Women can often support themselves but I don’t think it is right for women to become used to always depending on the men of the household to be able to take care of their every need. If a man isn’t capable of doing so it is almost as if society views them as inferior. Women should keep working enough to keep their foot in the door of the workplace. I think that eventually the norm of stay-at-homes could be broken, they could sometime be accepted, but the stereotype of men should be able to change to make it so a man can do whatever is necessary to succeed, whether that means being a workhorse of a family or not doing so.

Since I was young I was socialized both positively and negatively in school, sports, and at home. In many ways this cycle of socialization has shaped who I am. What I want people to take away from this essay is that I think that people should be able to decide for themselves who they want to be in modern society without being judged. If I start working towards breaking down male stereotypes now ,I believe that I can have a positive impact on the people in my town and maybe even the world.

Martin Brown. Young Jobs In America. ( Pennsylvania Planet Magazine)
1.) What are you most proud of about your mask and why?

I feel like the part of my mask that I am most proud of is how detailed the symbols are, I really took a lot of time on each one to make sure they were all the best they could be.

My favorite part of my essay is when I say " as soon as I was old enough to play football I was practically chomping at the bit to get out on the field." I believe that this really describes my feeling towards football as a child due to my advanced case of socialization, this is a good analogy of me and I feel I used it well to describe what I was feeling.

3.) what will you remember from this project? Why?

I feel that my biggest take away from this project is the new awareness of societies effect on people and how negative or positive that effect can be. Now I am mindful of when this is happening in the every day world around me.

I think that the habit of heart and mind I need to work on most in my future projects is evidence, I have very good points that are from legit sources but I don't always quote correctly or even remember to quote.
Powered by